Sign up for our newsletter and be the first to receive the latest on our products, upcoming events, and what is happening in the world of Finn Juhl.

The Poet Sofa first saw the light of day at the Copenhagen Cabinetmakers’ Guild Exhibition in 1941 and was originally designed for Finn Juhl’s own home. Taking cues from surrealist art, the small two seater sofa conveys comfort, craftsmanship and respect for the materials used. The sofa is upholstered by hand in Denmark and is available in a variety of textiles and leathers, and the legs come in oak, walnut or black painted.

Please note that the actual colours and materials may vary due to different screen balances and settings. While the version shown is supposed to be viewed only as an example, individual material photos can be found via our material page. 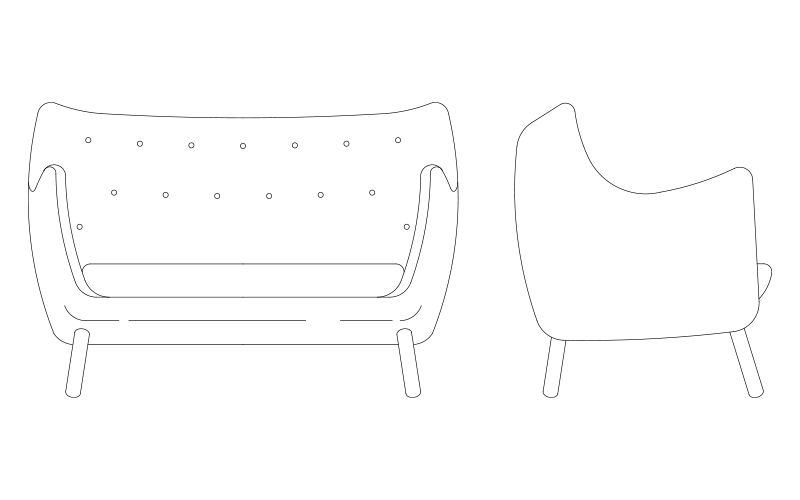 The Poet Sofa first saw the light of day at the Copenhagen Cabinetmakers’ Guild Exhibition in 1941 and was originally designed for Finn Juhl’s own home. Taking cues from surrealist art, the small two seater sofa conveys comfort, craftsmanship and respect for the materials used. The sofa is upholstered by hand in Denmark and is available in a variety of textiles and leathers, and the legs come in oak, walnut or black painted.

The Link Between Furniture and Sculpture

Finn Juhl often found inspiration in contemporary art and at the Guild Exhibition in 1941, the Poet Sofa was shown alongside a couple of sculptural plaster reliefs by artist Sigurjón Ólafsson. The art echoed the organic curves of the sofa and in this way, Finn Juhl indicated the link between furniture and sculpture. The Poet Sofa is shaped in a beautiful curve that almost seems to embrace the seated person. The padded frame is fully upholstered and creates a snug and inviting seat that forms a very comfortable embrace for two people, who will be sitting comfortably close. The upholstery is very slim compared to the norm at the time and it was the result of Finn Juhl’s ambition to create functional furniture for smaller apartments.

The Poet Sofa with walnut legs and 'Base' upholstery in the colour '0011'.
About the poet sofa

How The Poet Sofa Received its Name

For a long period of time, Finn Juhl worked in close collaboration with master joiner Niels Vodder. At one point, Niels Vodder decided to gift his daughter, Kirsten Vodder, a Finn Juhl sofa. Kirsten was married to the poet Frank Jæger, who used the sofa to relax while pondering the great questions of life. The Danish illustrator and humorist Jørgen Mogensen was a frequent visitor at their house, which in time inspired him to create the comic strip "Poeten og Lillemor" (The Poet and the Little Mother). The comic revolved around their home and everyday life.

Originally, the strip was intended as a parody of the great lyricist of the time, Frank Jæger. He played the part of the young "Poet", who would much rather daydream than write. 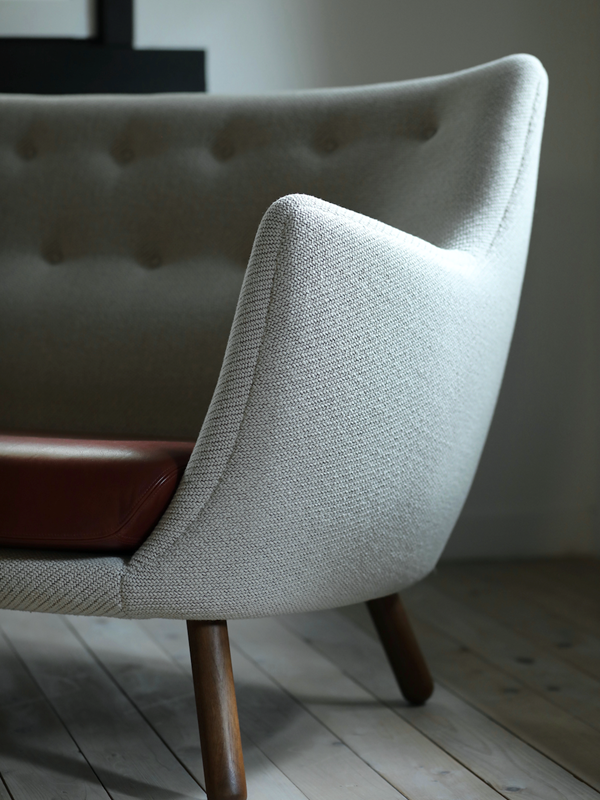 The comic strip about the daydreaming poet was published in one of the leading Danish newspapers, Politiken, for more than 50 years, from 1950 to 2004.

When delving into the history of it all, it was in reality another Finn Juhl sofa, which Niels Vodder gifted to his daughter Kirsten. However, the inspiration for Jørgen Morgensen's comic strip derived from Finn Juhl's Poet Sofa, as it had already achieved status of a classic piece at this point in time. The comic strip thus birthed the name of the Poet Sofa, which has stuck with it ever since.

The Poet Sofa with walnut legs and 'Watercolour' upholstery in the colour 'Butterscotch Yellow'. 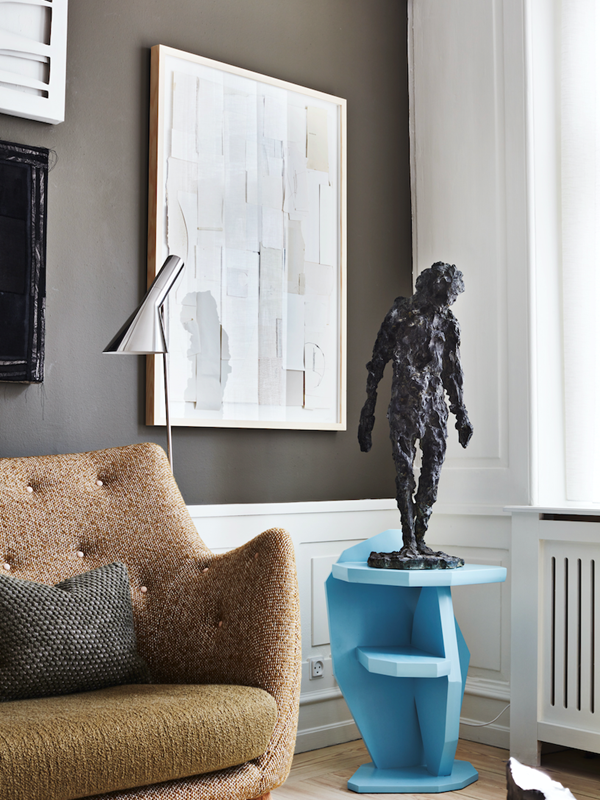 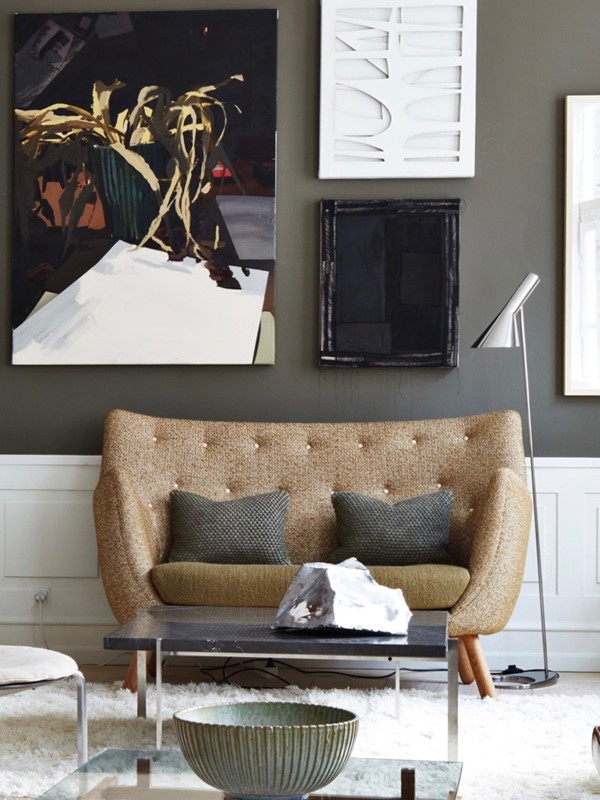 The Poet Sofa displayed at the Cabinetmakers’ Guild Exhibition in 1941.
OUR PARTNERS AROUND THE WORLD

Locate a retailer near you. Our trusted partners offer a large range of our furniture and will guide you in terms of choosing the right material and finding the perfect piece to fit your need. 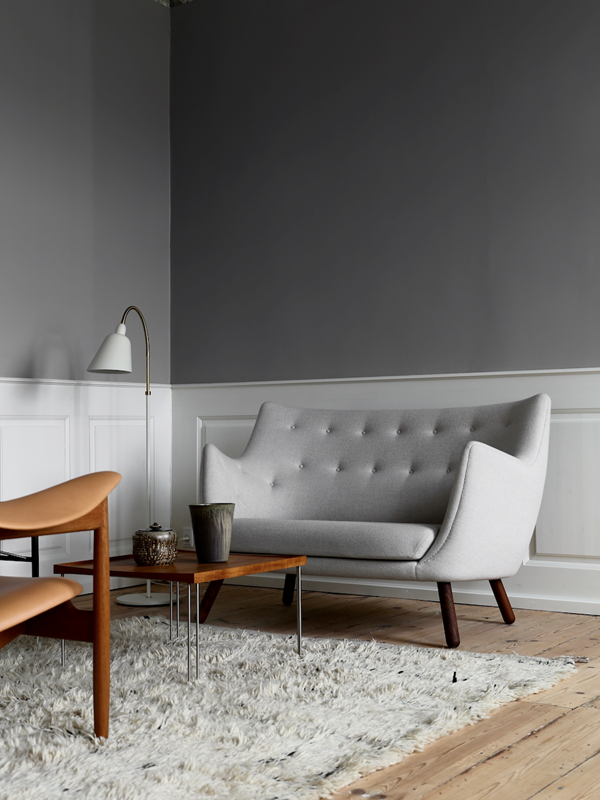 The Poet Sofa with walnut legs and 'Hallingdal' upholstery in the colour '103'.
THE PROCESS BEHIND THE COLLECTION

We want to continue to shed light upon the great amount of work that goes into producing each and every piece of Finn Juhl's sculptural furniture. It is crucial that the details must be as fine and pure as if it came from the old cabinetmakers’ workshop, but our understanding of quality also includes durability. The furniture has to be so durable that the pieces can be enjoyed by people today and by generations to come. With respect for the tradition and the demand for longevity, we put only the best materials in the hands of the most dedicated and skilled craftspeople. 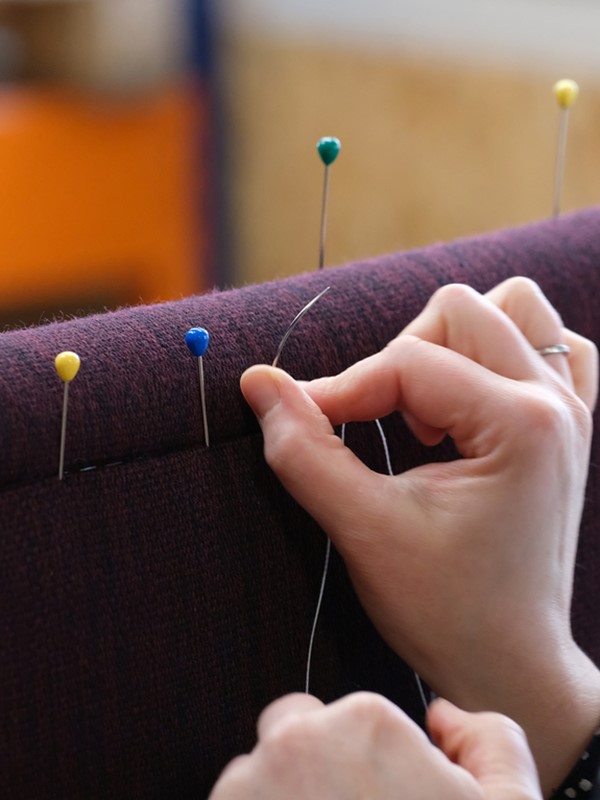 Like other modernist pioneers, Finn Juhl started from scratch without role models or inherited restrictions. He designed by measuring his own body and analyzing how the individual components of the chair should carry the human body. But contrary to his modernist contemporaries, with their streamlined, scaffolding-like structures, Finn Juhl aimed at a more organic and natural form. 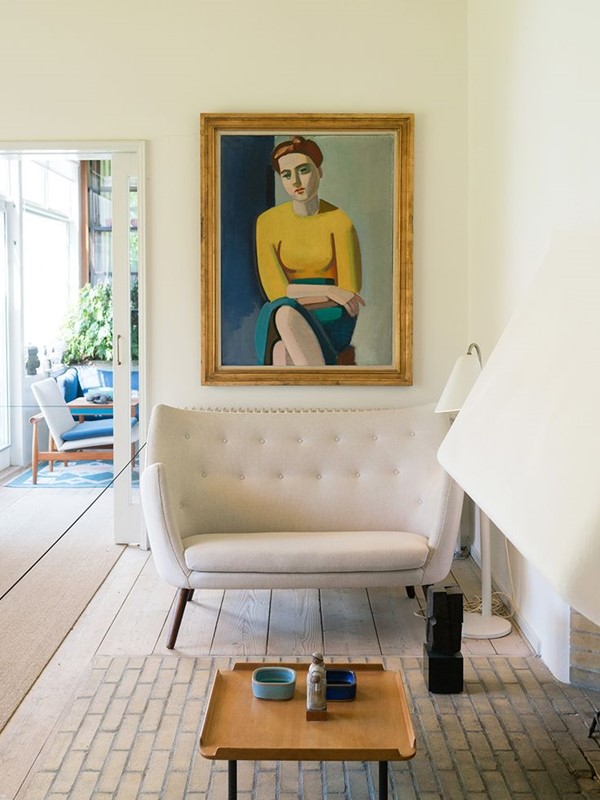 The Poet Sofa in Finn Juhl's own house in Ordrup. Above the sofa is a painting of Hanne Wilhelm Hansen (Finn Juhl's wife), painted by the famous artist Vilhelm Lundstrøm.